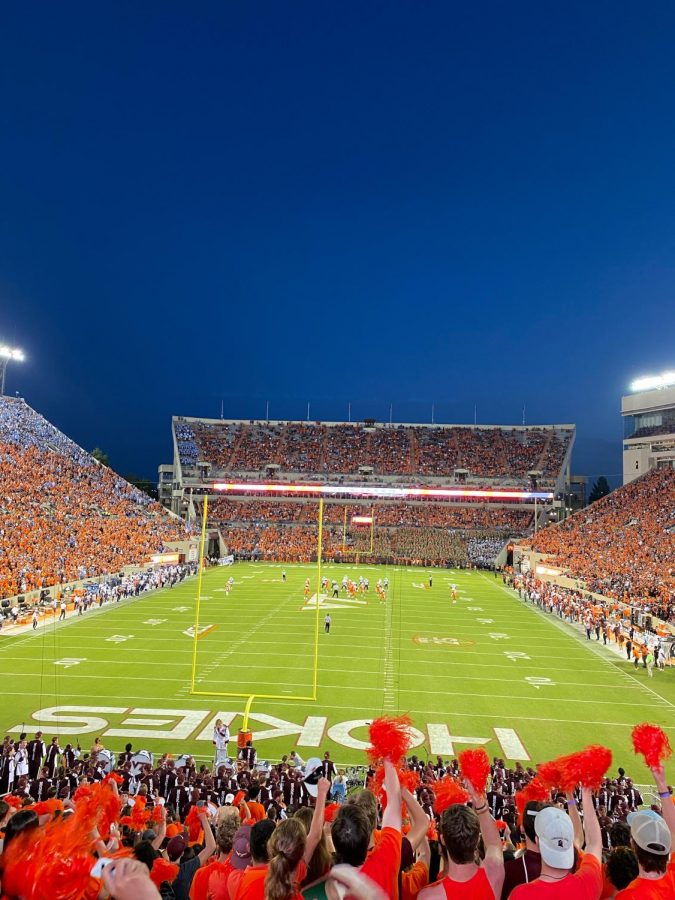 Pictured is the view from the student section at Lane Stadium.

When people say Metallica’s “Enter Sandman” has an earthquake effect, they mean it. On Sept. 4, 70,000 fans all jumped in the stadium stands at Virginia Tech at the first game of the season, causing a minor earthquake to be registered on the Seismograph scale.

After a year and a half of COVID-19 restrictions, fans were welcomed back into Lane stadium. The excitement led to tens of thousands of fans going crazy for the first game of the season.  “Enter Sandman” playing as the team storms onto the field with fans jumping in the stands has been a Tech tradition for 21 years.

“I didn’t think about a registered earthquake, since I was used to being at high school games, something like that never crossed my mind. But it was crazy how loud everyone got, ” Virginia Tech freshman and DRHS alum Trey Watts said.

Although Watts didn’t consider an earthquake, some people did.

“A registered earthquake happened before, so I assumed it would happen again. The stadium was packed and people had been waiting for over 500 days. It was impossible to imagine the fans wouldn’t be crazy,”  Virginia Tech freshman and DRHS alum Owen Reece said.

Some students might wonder if there is a difference in spirit at Deep Run sporting events versus a Virginia Tech game.

“It doesn’t really compare to Deep Run. The high school games are fun, but the atmosphere in college is completely different and there’s like 100 times more fans,”  Watts said. “The best part about the game was either at the very beginning during ‘Enter Sandman’ or at the very end after the win. Everybody was so excited to watch that the atmosphere was crazy.”

Deep Run may not be as crazy, but fans still make sure to get loud and have fun. With the student section yelling and jumping, and supporting the Wildcats, the stands feel like they’re about to fall beneath the fans.

“Our fan energy is good for how many people we have. Not as many people go to the games, especially the away ones, but for how many people there are we get pretty loud. I’d say our spirit is a 7-8 out of 10,” senior Can Man Nate Baker said. Sounds like there’s room for improvement, Wildcats.